Well, it’s been a while, and I’ve been thinking Where does the time go?!

We have been at a stand-still on our house since we’ve moved the wood shop in to our house for the winter. And now that spring is breaking here in Utah, we finally took a bit of rest on our projects, and have been working towards something a little more fun… which will be revealed later!

In the mean time, we took a 5 day mini vacation with my parents down to Las Vegas! I haven’t been there in about 8 years (when construction was under way along the entire strip) and their major upgraded infrastructure really payed off. It’s pretty nice now.

We came in through the North, and caught some great views along the way. If you know me, you know I love my mountains. We live in a valley surrounded by the Rocky’s, and it’s my home.

Here’s a wintery sunrise just outside our front window: 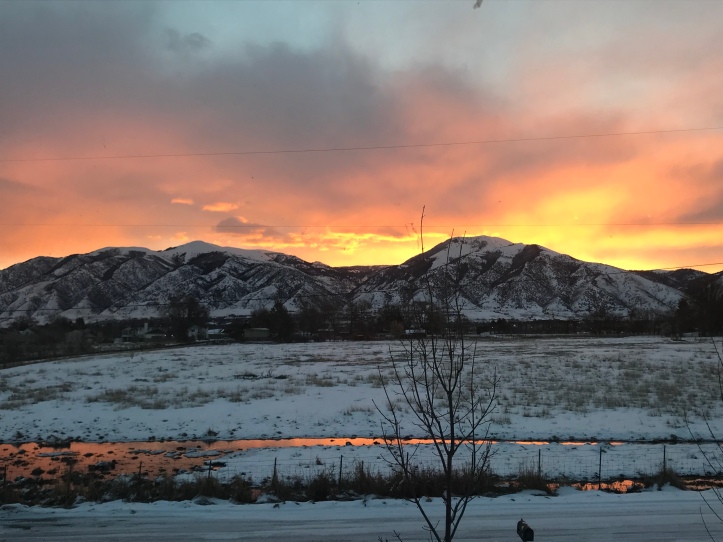 So on Friday morning, Sam and I packed up my parents, and headed South. 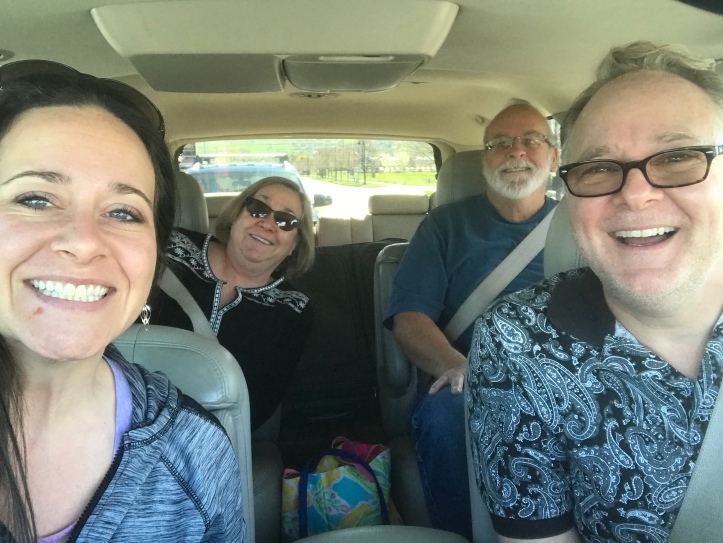 It was a long drive. Straight through, the map says 6.5 hours, but stopping for gas and groceries, it took more like 8 hours.

While heading south, I caught a glimpse of some beautiful stacked mountains near Utah’s Southern border: 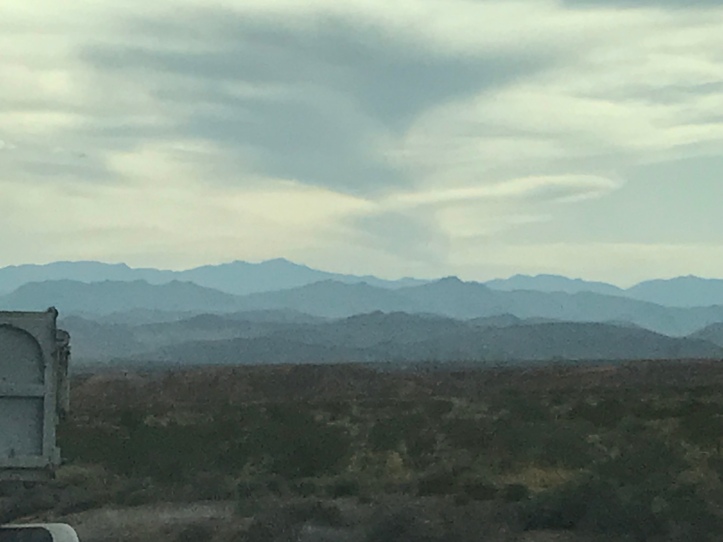 I felt it was very picturesque…

Then driving in to Las Vegas, you can see it’s just a tiny Oasis in the desert! If you haven’t been here before, this next photo may be a bit underwhelming. 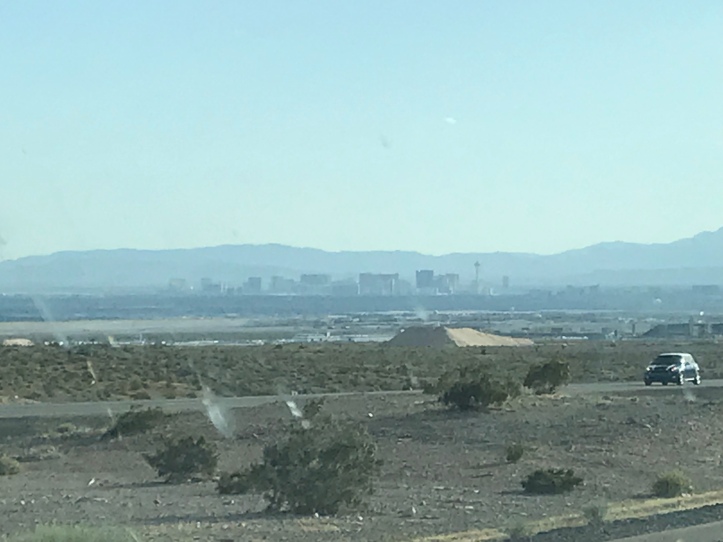 There it is! The strip! You may have to squint your eyes a bit to see the city.

We stayed at the New York New York hotel, and I’m now convinced it’s the best place to stay. It had the best outdoor ambiance, and a ton of tables and seating to stop and relax. Right behind the hotel is the T-mobile arena, where they have UFC fights, concerts and other events.

The first night out, we went to an Irish restaurant inside the hotel which featured a live band and clogger on the bar!

The next day, Sam and I enjoyed some alone time, and Sam did quite well on the digital roulette, winning 3x on numbers! 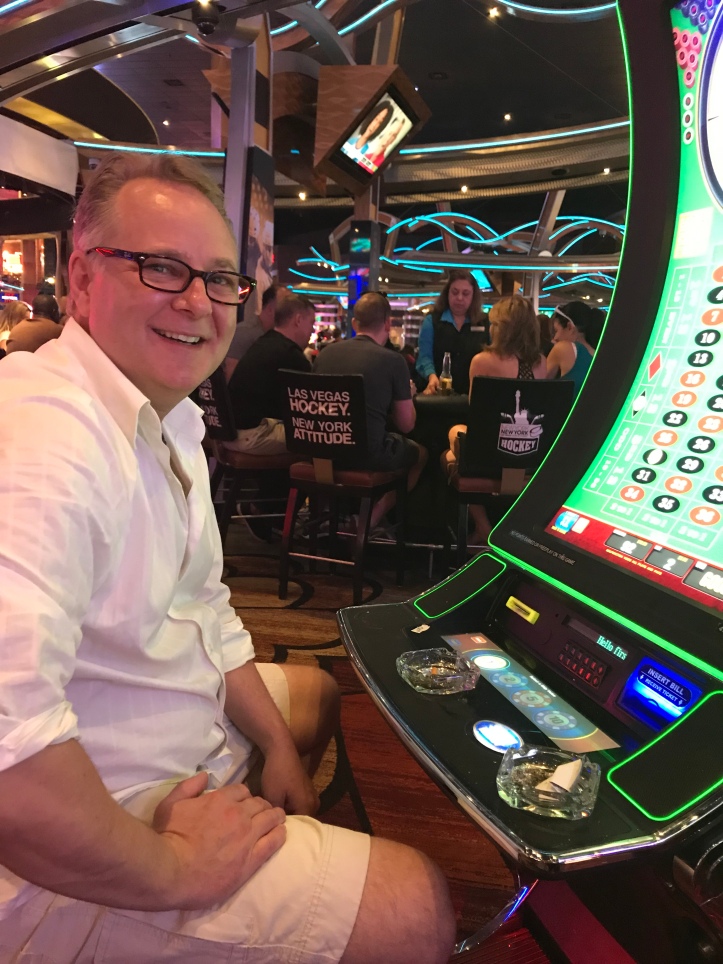 We made it up to the Bellagio fountains for a couple of songs. 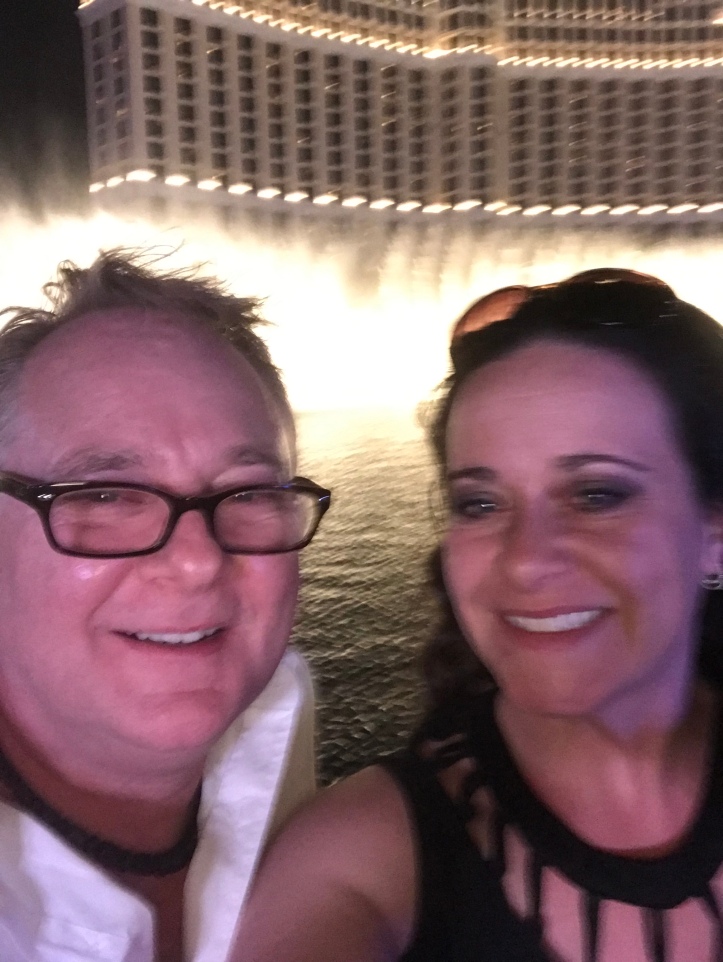 We stopped along the strip for a selfie: 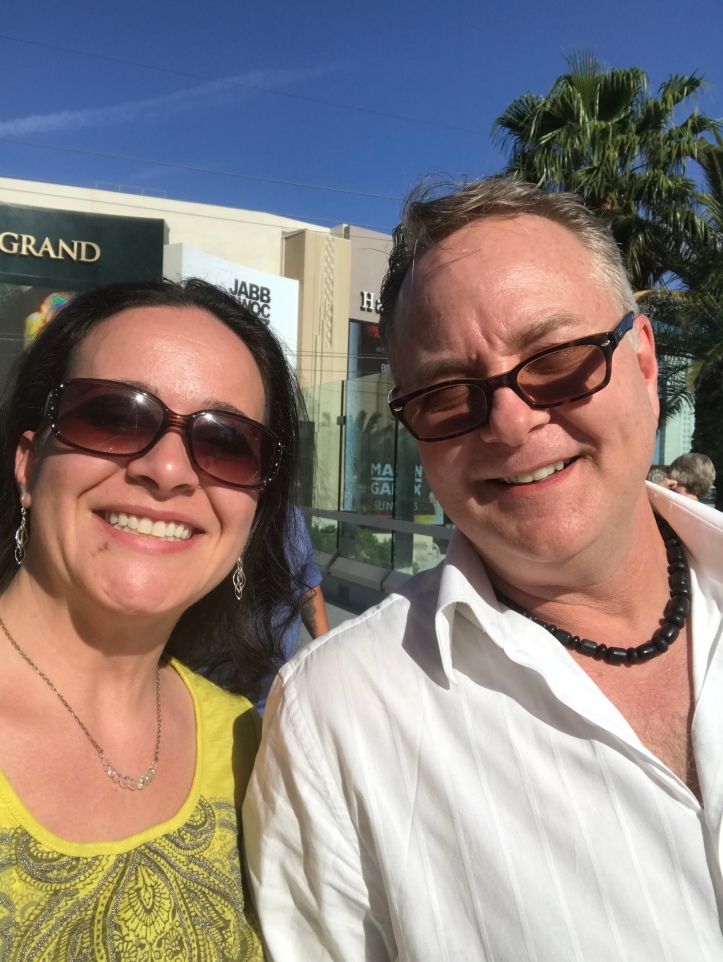 At the MGM Grand, we found a great Sports Betting area, and kept that in mind, because guess what?! The Kentucky Derby was going on Saturday! We found our horses, and made our bets. About 30 minutes before the races, we were in our hotel room, watching all the pre-race hoopla. I looked over at Sam, and said, “You know, we should really be on the floor. We can always watch a horse race at home on the TV.”

So we raced ourselves down to the NY NY sports betting; which was a much smaller area than MGM, so we raced across the street, and ended up squirming our way to a seat at the bar by the sports betting TVs, if you can believe it!

It was basically standing room only; and the energy in the room! When the horses left their gates, the track was a muddy mess, and you could see it was gearing up for a major upset. The horse that won the Kentucky derby, #7 Maximum Security, ended up being DQ’d because the horse moved out of it’s lane twice! It was over 20 minutes before the decision was finalized, and no one was getting paid! It was quite intense.

The next day, we went walking with mom and dad, where mom and I visited some flamingos: 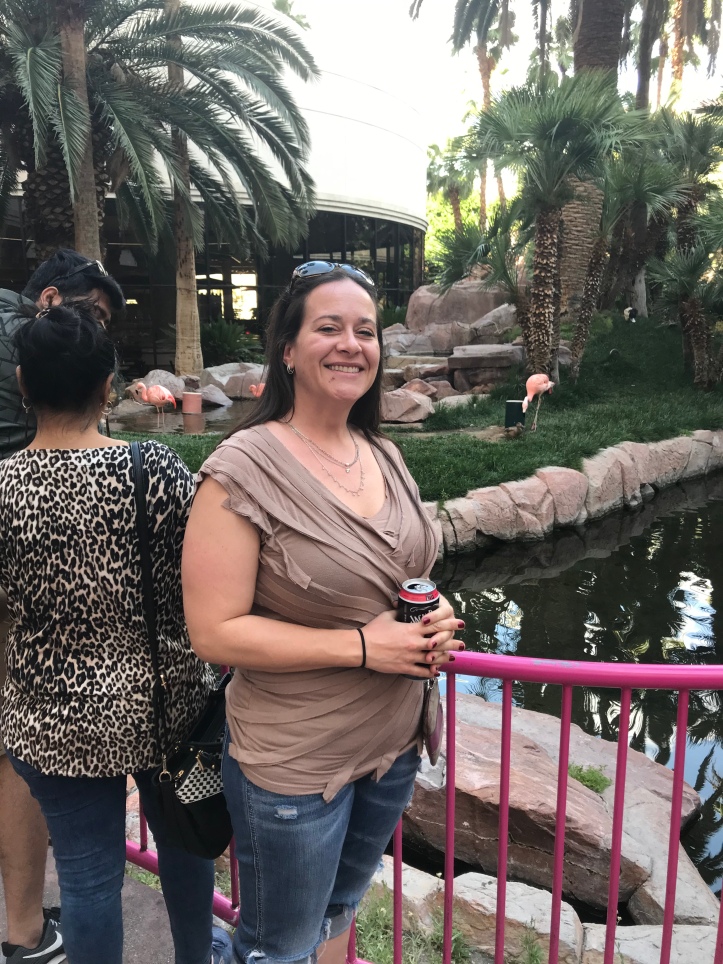 And we stopped in at a restaurant in the Paris for a meal: 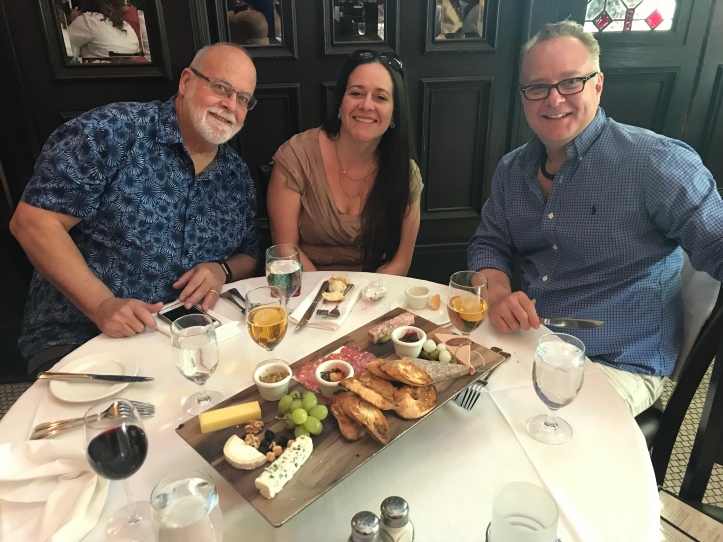 Turns out that our hors d’oeuvree cheese platter was enough for a meal! 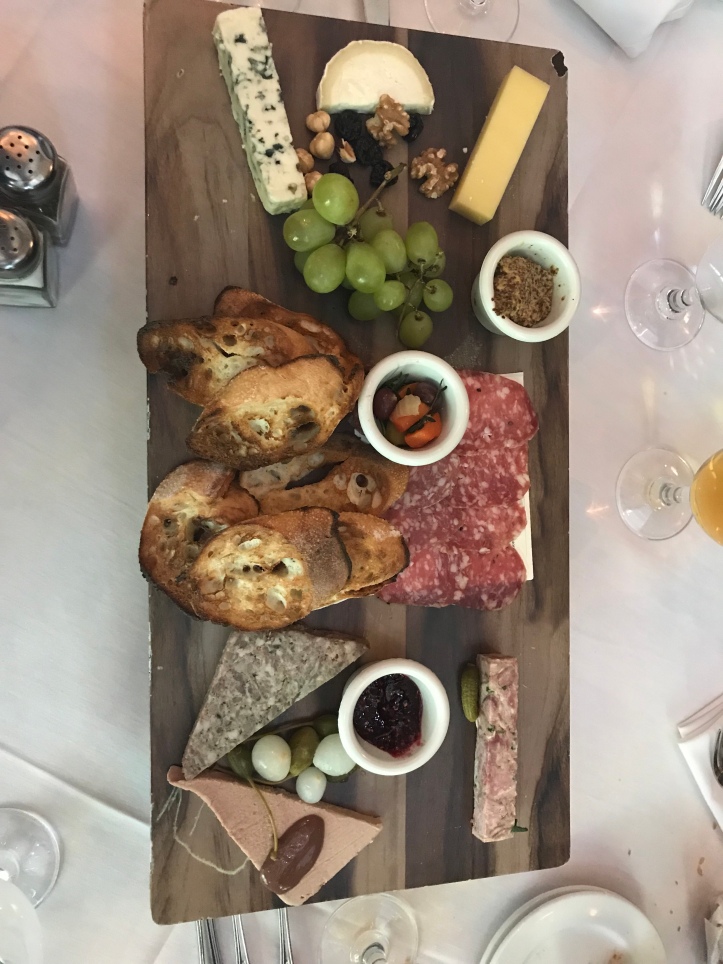 Pair that with a couple loaves of bread, and we were all full.

Dad figured out how to play Craps by watching the one and only YouTube, and it was so fun playing and learning a new game! (We are now in the works of setting up our own craps table for casino night every other week. I’ll be the house, so I guess I’d better learn the odds, eh?)

Day 3 we lounged around the New York New York, visited the pool, went on the roller coaster, and even saw Zumanity! What a great show!! 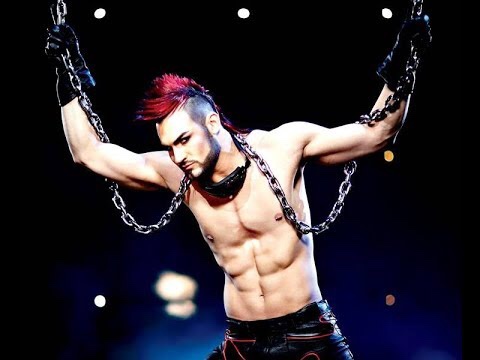 All in all, I’m glad to be back home now, (ok, I’m still trying to convince myself of that) and now it’s on to some yard work. So stay tuned for some out door projects!